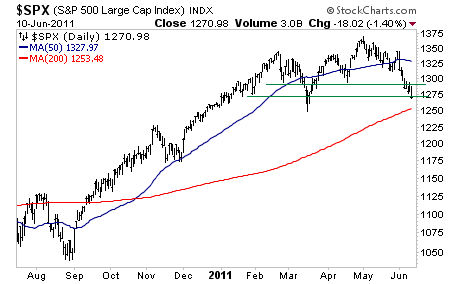 I warned investors to shift into more defensive positions last week. The warning was well place: small caps suffered a far worse decline (nearly 4%) compared to the Dow (less than 2%).

Indeed, we’ve now entered a period of “risk off”. Small cap and Tech stocks, which lead to the upside, are falling hardest. Stocks in general are in full-scale correction mode, while Treasuries have begun to rally: 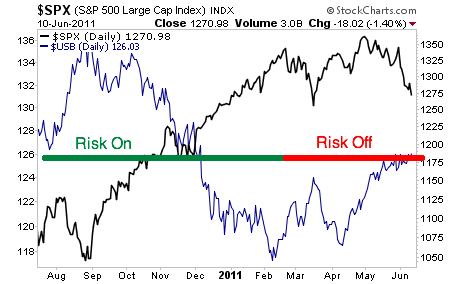 Treasuries and commodities were ahead of stocks here. And given the sharp rally we’ve seen in the former (and correction in the latter), stocks still have some catching up to do.

In the very near-term, we are oversold and could see a bounce early this week. However, every rally should be used to get more defensive as the primary prop for the stock market (QE 2) is ending in the next two weeks.

The one event traders will be hanging on to is the Fed’s FOMC meeting (June 21-22). If the Fed DOESN’T hint at additional liquidity measures, then stocks could enter a free-fall (the next Fed FOMC is August 9 2011).

Indeed, the Fed has gotten itself into an absolute bind. QE 2 bought roughly three months’ worth of improved economic data while simultaneously blowing energy and food prices through the roof. With public outrage soaring the Fed needs things to cool down before it can announce QE3 or anything like it.

The one exception to this would be if the markets enter a full-scale Crisis and stocks close in on 1,000 on the S&P 500. The most likely candidate to trigger this would be the Euro-zone where the “bailout game” might in fact be about to end. This combined with the ECB’s decision not to raise rates could result in the Euro currency getting VERY ugly in no time.

On that note, if we take out 140 on the Euro, that would be a major warning sign that we could be entering another round of systemic risk. 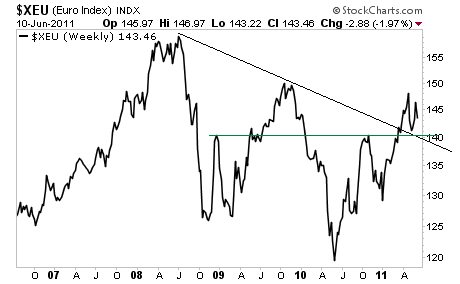 On that note, I’m already preparing subscribers of my Private Wealth Advisory newsletter for what’s coming. While most investors lost money last week, our two deflation trades took off. And we are close to getting “buys” on our other three deflation trades.

So if you’re looking for specific investment ideas (including buy and sell alerts) in this rocky market, few analysts on the planet have my ability to turn a profit during dangerous times.

To whit, I called the 2008 Crash months ahead of time and had my subscribers 100% in cash three weeks before the October-November 2008 nightmare hit. And the Private Wealth Advisory portfolio outperformed the S&P 500 by 15% during the Euro Crisis of May-July 2010.

So if you’re looking for someone to guide you through the coming dangerous times in the markets… you can take out a subscription to Private Wealth Advisory today and immediately begin receiving my hard-hitting analysis of the markets as well as specific investments to buy and sell to insure you stay protected… and turn a profit in the months ahead.