Is the US Dollar Predicting Another Deflationary Collapse?

Today at 12:30PM the Fed will release is FOMC minutes. With QE 2 ended in another week, the Fed June FOMC meeting was the last hope for bulls who believe the Fed is about to unveil another round of QE or some other additional liquidity measure.

As I’ve said repeatedly over the last few weeks, if the Fed doesn’t unveil something new, the markets will tank in a big way as the next Fed FOMC meeting is in August. With the US economy deteriorating at a rapid pace again and stocks’ primary support (QE 2) ending, the markets could see some very nasty drops to the downside.

Indeed, worldwide, interbank liquidity is beginning to dry up rapidly (just like in 2007). Europe has seen interbank lending collapse. And now China has found itself in such an interbank liquidity freeze that the central bank is halting the sale of various bills because there simply isn’t enough cash floating around to meet supply.

Combine this with the ongoing political struggles in the Middle East, roaring inflation in China, Europe’s ongoing banking collapse, and the US’s own debt problems (we’re raiding pension funds to meet new debt issuance) and you’ve got a recipe for disaster.

Put another way… are we about to experience another major round of deflation?

The US Dollar is definitely hinting that something is afoot. Since bottoming in May 2011, we already established a series of higher lows and higher highs: 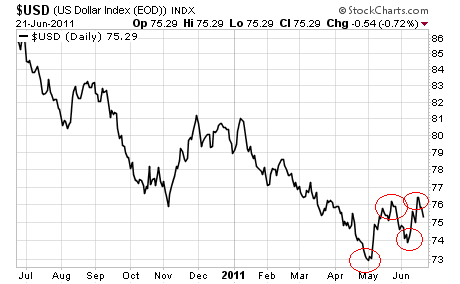 We’ve also broken above both the 20-DMA, the 50-DMA and we’ve staged a bullish cross-over (when the first breaks above the second). 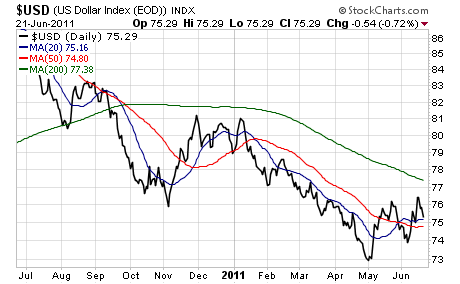 Big picture, we could definitely see a sharp US Dollar rally hit as we have a clear bullish falling wedge pattern forming in the US Dollar. The US Dollar has just poked its head out of this pattern, but we’ve yet to get a confirmed breakout. 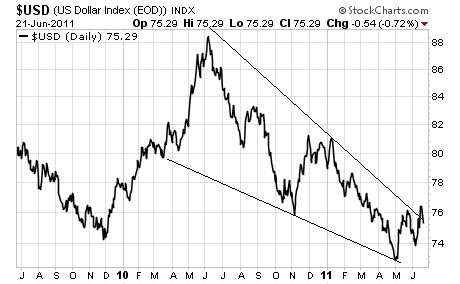 If we do get a confirmed breakout to the upside, the above pattern predicts a run to at least 80 if not 85. The only thing that could push the US Dollar to these levels would be a full-scale Crisis (the only times the US Dollar has rallied since 2007 was during Crises).

I want to be clear here. The US Dollar is ultimately a doomed currency. But it remains the “flight to safety” trade amongst global currencies (along with the Yen and most of all, Gold). Europe is far worse off than the US. And China’s now seeing a liquidity crisis of its own.

With that in mind, we need to consider that the US Dollar may in fact be predicting another deflationary collapse. Which is why if you haven’t already taken steps to prepare yourself and your portfolio for the coming disaster, you need to do so NOW.

Regarding profiting from a deflationary collapse, I just unveiled six specific trades to subscribers… all of which will pay off HUGE returns as the current stock market collapse accelerates.

To get started with you Private Wealth Advisory subscription today, download