The Fed Is Approaching the End Game… Are You Ready?

The financial world seems to think that because Greece accepted another bailout we’ll be off to the races in the markets.

Aside from how absolutely moronic this view is (how’d the first Greek bailout work out? And it was what 12 months ago?), we have to consider the backdrop against which this particular tragic-comedy is playing out.

The consensus view from the mainstream financial media and 99% of find managers is that liquidity and access to loose money from central banks will keep things afloat.

However, reality shows this not to be the case… at all. Consider for instance the impact of the Fed’s money pumps.

For starters, as a back of the envelope analysis, consider that in 2007 when the credit markets first jammed up, the Fed resorted to providing emergency money pumps of $30 billion or so.

So by the end of 2008, the Fed had put in nearly $1 trillion in capital to the markets. And this did absolutely nothing to avert the market collapse.

Then came QE 1, which put another $1.25 trillion into the markets. And even after QE 1 ended the Fed continued supplying the juice to the tune of $30 billion or so per month during options expiration weeks.

Then we get QE lite, which results in another $300 billion into the markets plus QE 2 which adds another $600 billion. So all in all, the Fed’s supplied a minimum of $4 TRILLION into the markets since 2008 (I’m not accounting for the trillions more in deal that have not been made public). And the S&P 500 is at roughly the same level as before the Bear Stearns collapse. 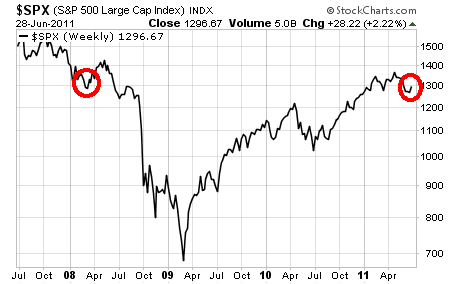 So on the surface of it, the Fed’s money spending appears to have accomplished something positive: they spent $4 trillion and the markets rallied bringing household net worth up 17% from its low in 2009.

However, when you dig deeper into the specific results of the Fed’s actions it becomes clear that not only is the Fed creating a giant Ponzi scheme in the financial markets, but that we’re getting close to a breaking point.

If we step back and look at this plainly, we will see that reality does not in any way match the view that the Fed’s liquidity will solve the financial world’s problems. In fact, we see that each Fed move is having a smaller and smaller impact on the financial markets. Extend this idea out a bit further and you find that we will reach a point at which the Fed will no longer have any control over the financial markets.

I believe that we are rapidly approaching that point. Indeed, the Fed has already hit a wall in the sense that the negative impact of its policies (inflation/ prices soaring) far outweigh any positive impact (stocks rallying).

At some point, and I cannot say when, the market will begin to realize that the Fed cannot backstop the entire financial system. When this happens, THEN the REAL Crisis will hit and it will make 2008 look like a picnic. The reason is quite simple: the next Crisis will be a Crisis of Faith pertaining to the US Federal Reserve.

For 80+ years, the US financial system has operated under the belief that the Federal Reserve could handle any problem. This belief was put to the ultimate test in 2008 when the Fed faced off against the biggest Financial Crisis of the last 80 years. And the ONLY thing that kept us from the brink was the belief the Fed could fix things.

It couldn’t. And we’re all beginning to see that now.

So when the next Crisis hits it will become clear the Fed CANNOT fix these issues (it never could but most people hoped regardless). And that’s when the real collapse will begin.

It’s coming. The fact Bernanke has admitted publicly that he’s clueless what’s going on is a MAJOR step towards the world realizing that he’s lost control. Which is why if you’re not taking steps to prepare for what’s coming now, you need to start moving.