The financial world is beginning to break down in a big way today. In the currency markets, the second Greek bailout is turning out to be precisely the dud I said it would.

After all, it was only one year ago that Greece received its first bailout. Having now asked for extensions on returning those funds AND a second bailout, it’s bizarre that anyone would think giving more money to Greece would fix its problems.

Italy, Spain, and Portugal are all on equally shaky ground. The last of those three was actually just downgraded to “junk” status by Moody’s last week. So it’s not too surprising that the Euro is breaking down in a big way this morning. 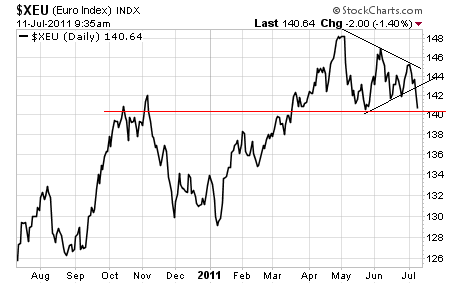 We look to have broken out of the triangle pattern I talked about before. We’re now coming up against major support at 140. If we break this line it’s 136 in short order.

The drop in the Euro has coincided with an explosive jump in the US Dollar this morning, which in turn is kicking stocks and commodities (with the exception of Gold and Silver) down in a big way.

I said before that I thought the ramp job in stocks was more manipulation and performance gaming than anything else. If the S&P 500 breaks below 1325 and stays there I’ll be proven right as we’re then going to 1,300 if not 1,275 in very short order. 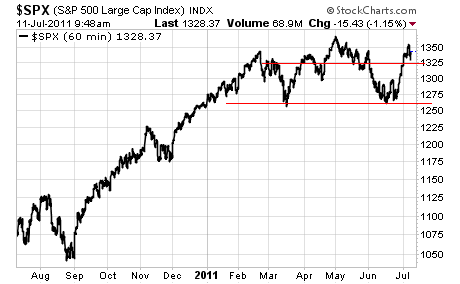 Meanwhile, Gold is on the verge of challenging its all-time high in US Dollars (and Euros) once again asserting that it is in fact a currency, NOT a commodity. If we break 1,550 and stay there then the next leg up in the precious metal will have begun. 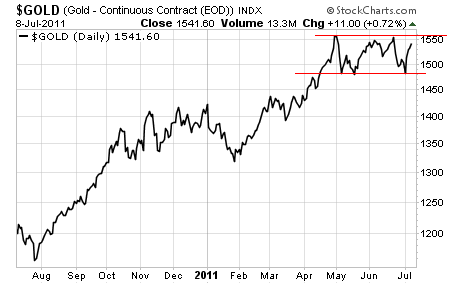 In plain terms, the financial world is on RED ALERT this week as there is really little to hold the markets up anymore (QE 2 ended). Meanwhile the whole financial system is showing signs of extreme duress.

European banks (and nations!) continue to remain insolvent and we will be seeing defaults in the near future. The situation there has not ended by a long shot and I am certain the Euro will no longer exist in its current form within 12 months.

And then of course there is the US, where we have officially breached the debt ceiling and are stealing from pension funds to meet new debt issuance. Indeed, things are now so bad with the US that Tim Geithner is potentially jumping ship.

How bad must things be getting that Geithner, a man who has lied and swindled the American people with impunity, and has never once suffered the consequences of his actions, is voluntarily “getting out of Dodge”?

Indeed, I think we could very easily see a repeat of the May 2010 Collapse, if not another 2008 type event in the near future. Only this time, the Crisis will be far far worse because the financial world will have realized that the central banks CANNOT solve the problems that brought about 2008.

When that happens, the REAL Crisis will start along with stock crashes, currency defaults, food shortages, and the like. Which is why if you’re not taking steps to prepare for what’s coming now, you need to start moving.