The Fed is FREAKING Out

Indeed, it just posted the single biggest money pump since Lehman Brothers…  on the week of June 27 2011. If you’re looking for a reason that stocks have been ramped so much higher in the last two weeks. This is it.

Indeed, for the week ended June 27, the Fed flooded the financial system with $76 BILLION in liquidity. Bill King of the King Report puts that number into perspective noting that it’s BIGGEST increase since September 22, 2008 right after Lehman Brothers collapsed.

That’s right, the Fed just juiced the system as much as it did when Lehman Brothers went under. While a shockingly large single money pump, the Fed’s generally been flooding the system with liquidity at a pace equal to that of 2008 since the beginning of the year. 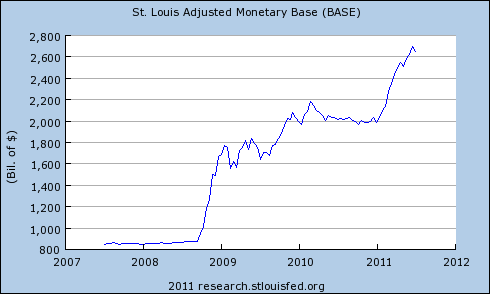 In 2008, the Fed put roughly $1 trillion in liquidity into the system to try and hold things up. So far in 2011, it’s put in nearly $700 billion. You think that the recession ended and systemic risk has gone away? Explain this one.

In simple terms, it’s clear that beneath his attempted calm, Ben Bernanke is in fact scared stiff. Why else would he be printing money night and day? If the financial system was indeed stable and secure, why is he pumping money at the same pace as 2008?

This all ties in with what I’ve been saying for months now… that 2008 was in fact the warm up and that the REAL Crisis is fast approaching. And when it hits, the Fed will be POWERLESS to stop it. Because this time it will be entire countries, NOT just Wall Street banks that collapse. So what’s coming will be the equivalent of 2008 all over again, along with food shortages, civil unrest, outbreaks in crime, bank holidays, and the like. It will, in short, be like what’s going on in the Middle East today (though NATO won’t be bombing us).

Which is why if you haven’t already taken steps to prepare yourself and your portfolio for the coming disaster, you need to do so NOW.

When it comes to profiting from this kind of disaster, few people on the  planet have my ability to make Crises pay off.

To whit, my clients actually made money in 2008, having been warned a full three weeks in advance of the Crash to get out the market and go short.

I believe we could see another 2008  situation unfold in the near future, which is why I just unveiled six specific trades  to subscribers… all of which will pay off  HUGE returns as the current stock market collapse accelerates.