Stocks have started to break down in a big way again. It looks as though we’ve entered a wide trading range on the S&P 500: 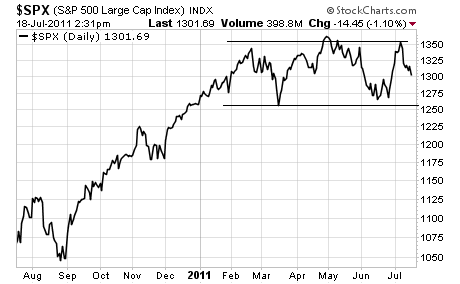 If we don’t bounce hard at 1,300, we’re going to 1,250 in short order. The $1 million question on everyone’s mind is whether this is just a correction or the start of another Crisis.

The US Dollar is indicating it could very well be the latter: 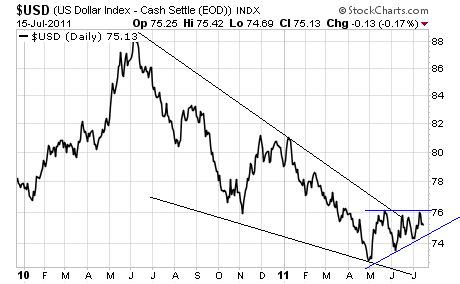 As you can see, the US Dollar looks to have just broken out of a falling wedge pattern. The ultimate target for this breakout, if confirmed, is over 84. The only thing that could instigate that kind of move would be a full-scale Crisis (the last two significant US Dollar rallies were due to the 2008 Crash and 2010 Euro Crisis, respectively).

If this happens it will be the Eurozone that starts it. The debt problems over there have no spread to Italy, a country far too large for the EBC to bail out. And with the European banking system being just as, if not even more saturated with toxic debt as the US’s, we could see a systemic collapse over there from just about anywhere: Portugal could take down Spain which could in turn take down Germany, etc.

Indeed, the Euro is hanging on for dear life at 140. A break below this level would indicate we are at the beginning of a serious breakdown in the Eurozone. That would be the trigger to watch for the beginning of REAL trouble. 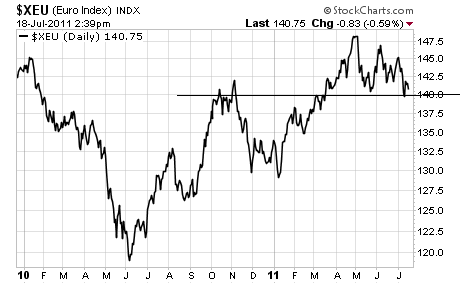 However, one thing is clear: we are fast approaching the REAL Crisis.  And there’s no shortage of Black Swans to hit either. The Euro problem isn’t going away. In fact, it’s now spread from Greece to Italy and Portugal… the latter county now being officially rated as “junk.”

Meanwhile, China is experiencing a liquidity Crisis on par with the Lehman-collapse. In fact, a recent bond auction there failed to sell EVEN HALF of the bonds offered (there’s not enough capital available).

And then of course there’s the US where we have only two weeks to deal with the debt ceiling before we begin a default.

The next Crisis is literally at our doorstep. And it’s going to kick off another 2008 episode as all the over-leveraged players (read: EVERYONE) will have to sell positions to meet margin/ redemption calls. However, this time around we’ll also see civil unrest as people lose their social safety nets (unemployment, social security, etc).

What will follow will be the equivalent of 2008 all over again, along with food shortages, civil unrest, outbreaks in crime, bank holidays, and the like. It will, in short, be like what’s going on in the Middle East today (though NATO won’t be bombing us).

Which is why if you haven’t already taken steps to prepare yourself and your portfolio for the coming disaster, you need to do so NOW.

When it comes to profiting from this kind of disaster, few people on the  planet have my ability to make Crises pay off.

To whit, my clients actually made money in 2008, having been warned a full three weeks in advance of the Crash to get out the market and go short.

I believe we could see another 2008  situation unfold in the near future, which is why I just unveiled six specific trades  to subscribers… all of which will pay off  HUGE returns as the current stock market collapse accelerates (one is already up 8%).