According to French President Nicolas Sarkozy, he and Angela Merkel share an “absolute determination” to defend the Euro. I find that hard to believe as:

The European bailouts were always ultimately about Germany. Without German support, you have no bail out and no EU either.

So with that in mind, we need to consider that Angela Merkel’s party was absolutely destroyed in the German March 2011 elections, largely because she had been pro-bailouts and pro-the Euro. She’s not out of the woods yet either.

The next round of German elections comes in September (the 4th, 11th, and 18th). Is Merkel (and her party) really going to commit political suicide to support the Euro? After all, she would literally have to change the German constitution to participate in the creation of Eurobonds (the latest deranged ECB idea). You think the German people will go for that?

Me neither. Especially considering that the German economy is starting to roll over: GDP growth was only 0.1% (0.5% was expected). Both exports and imports fell upwards of 4%. It’s hard to believe the German people will want to continue bailing out Greece and other weaker EU countries when Germany itself is contracting.

However, in the very short-term, the Euro has been rallying for three primary reasons:

Short term, the Euro might be the most heavily manipulated investment on the planet today. The dynamic between the US Federal Reserve, European Central Bank, and Swiss National Bank makes this situation nearly untradeable in the short-term.

However, the political/ economic/ monetary backdrop behind this mess remains the same: Germany cannot and will not be able to bail out all of Europe. The short-term moves are nothing more than drama. The EU in its current form has entered the End Game.

Whether we see weaker players kicked out (Greece and Portugal), some kind of larger EU split (North and South), or a complete dissolution (possible but highly unlikely), the EU will be breaking apart within the next year to 18 months.

Howe precisely this plays out remains to be seen. Right now the Euro looks to have broken out of a wedge pattern within a larger upward trading channel. Once we break the lower trendline (black) we’re going DOWN. 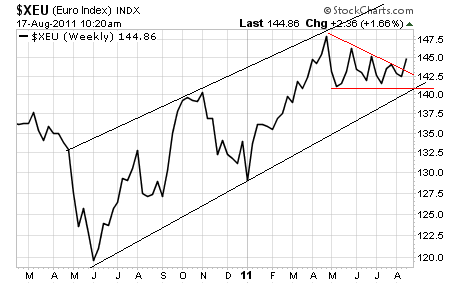 Which returns to a theme I’ve been expounding on for months now, that the Great Crisis has now entered its second round: the Sovereign Debt round, in which entire countries and regions will be going bust (rather than just private banks).

We entered this Round in earnest in late July 2011. It isn’t over. The fact that the proposed solutions now involve floating bonds for entities that don’t even really exist (Eurobonds) should tell you how desperate it’s getting.

I hold by my former statements: this is the time to be defensive, moving into cash and non-cyclical sectors. Gold and Silver are a little too hot right now, so I wouldn’t be adding to positions there. The same goes for US Treasuries.

However, if you’re looking for actionable investment ideas and in-depth market analysis that will not only get you through this mess, but actually help you make some money, you NEED to get in on my Private Wealth Advisory newsletter.

Over the last two weeks, while 99% of investors got crushed, Private Wealth Advisory subscribers locked in seven winners including gains of 6%, 7%, and 9% in as little as one day (no we were not using options, just stocks and ETFs).

They’re also taking steps to prepare their families and loved ones for what’s coming with my Protect Your Family, Protect Your Savings, and Protect Your Portfolio reports, which are also included with every Private Wealth Advisory subscription.