China Can’t Save Anything… Neither Can the Fed

The similarities between 2008 and today are getting scarier by the day. We’ve already seen the Hank Paulson mega-bazooka-bailout from the Emergency Fund in Europe. We’ve also seen short-selling bans, verbal interventions, the Warren Buffett bailout (recently BAC, though it was GS in 2008) and of course the “China saves the day” purchases (Morgan Stanley in 2008 and Europe today).

Now we have Societe General’s CEO doing his best Dick “we’re well capitalized” Fuld impersonation on CNBC, as well as yet another “China saves the day” rumor forcing the markets up nearly 2% in just one hour. 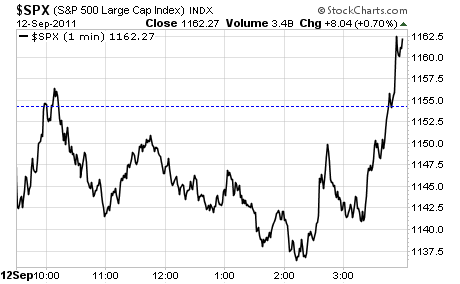 Does anyone remember how China’s 2008 “save the day” purchases turned out? How about Wall Street’s claims of being “well-capitalized” (including CEOs of Merrill Lynch, Lehman Brothers, even Goldman Sachs)? Have people really forgotten how that whole mess turned out in 2008?

Most importantly, does anyone REALLY think this situation will turn out differently this time around? Who exactly would want to buy the market based on rumors of China buying European bonds? How did China’s support of the Euro work out earlier this year? 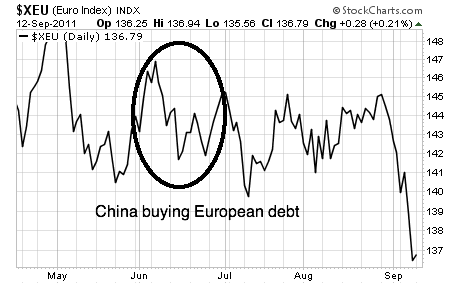 Let’s be honest here. Neither China, nor the ECB, nor the Federal Reserve can stave off the collapse that’s coming. Indeed, the Fed spent $900 billion and nearly one year to prop the markets up… and we’ve wiped out ALL of those gains in just one month. 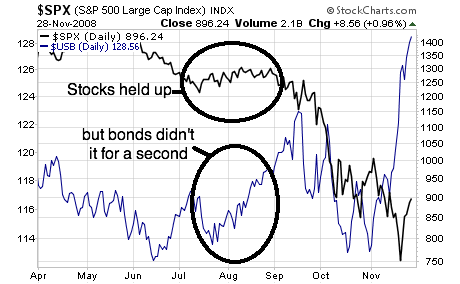 On top of this, the credit markets indicate that we are now heading rapidly into a full-scale Depression and market Crash that will make 2008 look like a picnic. Do you remember a time when stocks held up on rumors while the credit markets forecast a collapse?

That’s right… the last time stocks held up while Bonds and the Credit markets forecast disaster was right on the even of the 2008 Crash. They’re flashing the SAME warning signals this time too. Only this time the powers that be won’t be able to do anything about it.

Indeed, by the time the smoke clears on this thing we’re going to see civil unrest, bank holidays (no to mention hundreds of bank failures) systemic collapses, and even food shortages.

Do not be fooled by the mainstream media they’re completely behind the curve on this one (just as they were the 2008 Crash).

I’m not. Indeed, I’ve got investors already positioned for what’s coming with a number of concentrated Crisis Trades that will pay out HUGE returns as the Crash unfolds.

Case in point, while everyone else lost their shirts in the last month, my clients actually MADE money.

We’ve also prepared our families and personal finances for the systemic risk that will be soon hitting the markets thanks to my three Special Reports Protect Your Family, Protect Your Savings, and Protect Your Portfolio.

We’re literally ready for whatever may come, whether it be bank holidays, food shortages, civil unrest, markets Crashes and more.

And we’re going to make a lot of money from it too (my Crisis trades all paid out triple digit returns in 2008).

You can too. With a “trial” subscription to my Private Wealth Advisory newsletter.

And all the market insights, special reports and trade triggers you learn from me are yours to keep… even if you decide to cancel your subscription and request a full refund during the first 30 days of your subscription.