The Central Banks Are Losing Control

The market is rallying on short-covering and the usual options expiration manipulation. It’s now obvious traders are gunning for 1,200 on the S&P 500. We were at 1,140 o the S&P 500 only three days ago. A 5% move in just two days is not healthy nor is it good for the market as a whole. 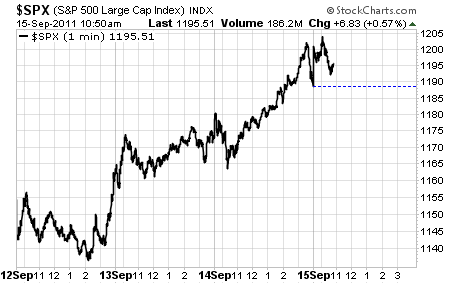 The economic and fundamental backdrop today is absolutely terrible. Retails sales were negative when you account for inflation. The Philly Fed index missed again. Last month we didn’t add a single job for the first time since 1945. And on and on.

The bond and credit markets are now pricing in an economic depression while stocks are roaring as though the recovery is fully in place and we’re going into another period of sustained economic growth. Which one are you going to believe? 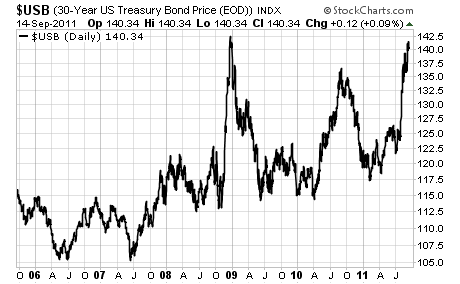 Given that stocks mis-read the 2007 recession, the 2008 liquidity Crisis, the Euro Crisis, Greece, and the ongoing US depression, we’d suggest not betting on stocks being right this time.

The primary problem is that the world Central Banks continue to intervene to prop the markets up. We had a global intervention earlier today… forcing the US Dollar to collapse while the Euro soared.

This is an act of desperation. It is essentially an admission on the part of the Central Banks that Europe is in a full-scale liquidity crisis a la pre-Lehman.

Indeed, what’s truly amazing is to see stocks rallying on news concerning Greece… at the same time that Greece bonds are pricing in a default with 100% certainty. Makes you wonder just who is buying stocks at these levels.

Could the Fed be forcing stocks higher in anticipation of a Greek default just as it bought the market following its disappointing August 9 and Jackson Hole announcements? Or could the Fed be juicing the market higher because no QE 3 is coming next week at its FOMC meeting?

The primary point is this: stocks have been notoriously wrong on most economic developments for well over 3 years. The larger, more liquid credit and bond markets are forecasting an absolute disaster is about to unfold.

Indeed, I fully believe we‘re on the eve of another 2008-style Crash. All the signs are there. Whether it’s a Greece default, Societe General going under, or some other event, the markets are on DECON Red Alert.

On that note, if you’re looking for actionable advice to help you navigate the coming carnage, my Private Wealth Advisory newsletter has been showing investors how to profit from any market environment.

To whit, my clients MADE money in 2008. They also made money during the Euro Crisis of 2010. And they’re making money now, while 99% of investors lose their shirts.

If you’d like to join us, you can take out a “trial” subscription to Private Wealth Advisory… and join my list of private clients in receiving my bi-weekly market updates and real-time trading alerts… if you…