The financial markets are literally standing on the ledge of a cliff looking down into the abyss. The fact we’ve had a coordinated Central Bank intervention in the last week should tell you just how desperate things are getting.

The one hope for the bulls is that the Fed will announce some massive new program at its September meeting which takes place tomorrow and Wednesday. I fully believe the Fed will disappoint in a big way as Bernanke and his loose money policies have become politically toxic: see the GOP debate in which all frontrunners united in their criticism of the Fed.

The market looks to be agreeing with me. The bearish flag formation I warned about last week remains in play. The ultimate downside target for this is 1,000 on the S&P 500. 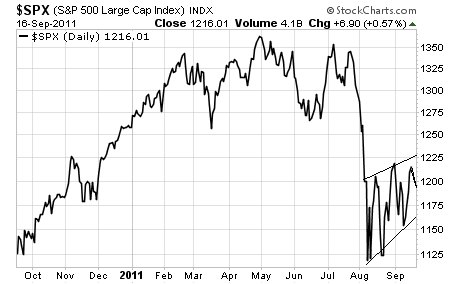 Within the bearish flag formation, we’ve also got the makings of a Head and Shoulders pattern: another very bearish formation. The drop Sunday night has made this pattern even more probable. 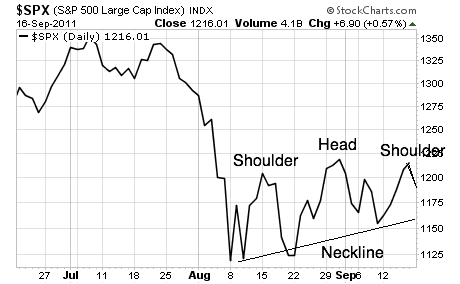 Neither of these formations predict a massive rally on QE 3 or some other new Fed program. Indeed, how can the Fed announce something new? A record number of Americans say they are paying more for their food. Oil is close to $90 per barrel. And Gold is north of $1,800, having touched $1,920 earlier this month.

Aside from this, the Fed has already instigated several new moves this month including the coordinated Central Bank intervention of last week and the opening of FX swap lines last month. I view these moves as preparation for a Greek default, which is most certainly in the near future.

Indeed, having staged two bailouts of Greece and talking down the possibility of a Greek default non-stop over the last 18 months, the ECB and political leaders in Europe seem to have done a complete 180, with the notion of a Greek default now a matter of “when” not “if.”

In early 2010, a Greek default was never even considered to be on the table. At that time, the entire discussion focused on whether or not Greece even needed a bailout. Today, the words “Greek Default” show up in almost every headline pertaining to Europe.

Greece Has 98% Chance of Default on Euro-Region Sovereign Woes

I fully believe that behind the scenes, the groundwork has already been laid for Greece to default. The market is already pricing this as a 100% certainty. France has its own problems and won’t be able to provide another Greece bailout. Germany is now in another round of elections in which voters are destroying Angela Merkel and her party for supporting the bailouts… at a time when it’s revealed that even German banks needs tens of billions more in capital.

In simple terms, the “bailout” madness is ending in Europe. What will follow will be a Greek default followed by debt collapses and restructurings in Italy and Spain. Europe is already aware of this, which is why liquidity has dried up to the point that the world’s Central Banks had to stage a coordinated intervention last week.

Indeed, I fully believe that we may in fact be on the verge of a Crash in the markets. All the Red Flags are there. Europe’s entire banking system is on the verge of systemic collapse. Take a look at European banks and you’ll see what I mean.

This is Agricole, the mega-French Bank. Does this look like a solvent financial institution to you? Do you really think that Europe has a chance when even French and German banks are collapsing?

Let’s be blunt, the global financial system is now on DEFCON Red Alert. If you have not already prepared your portfolio for a possible CRASH, you NEED to move now! Because by the time the selling pressure comes back into the markets in a BIG way (next week or so) it will be too late.

I can show you how to turn this into a time of profits, NOT pain. My Private Wealth Advisory subscribers MADE money during the Crash of 2008 as well as the Euro Crisis of May 2010. And we’ve already locked in gains of 7%, 8%, and 9% during the first leg down in this latest collapse.

In fact, 8 of our last 9 trades have made money. And we’ve taken action (and trading positions) to profit in a BIG way from the very REAL potential of systemic risk with my Crisis Trades: the very trades I used to make triple digit returns during the 2008 Crash.