Good Thing that Euro Crisis is Over… Right?

The trouble with financial forecasting for Europe is that the biggest decisions are always made in the political arena, NOT economically. Case in point, Greece, which is obviously bankrupt, voted for another round of bailouts despite the fact the first round was a disaster (won’t be paid back)  and the Greece economy is in ruins.

From a purely economic standpoint, it’d made a heck of a lot more sense to kick Greece out of the Eurozone (why should Germans be shouldered with Greek liabilities?). No businessman with a clue would want to support another Greek bailout. However, politics, not business rules in Europe politicians are both clueless and insanely corrupt.

This is why the Euro has held up and even rallied despite the fact the Eurozone is beyond doomed. Does anyone really believe the Euro is going to even exist in its current form a year from now? We’ve had two Greek bailouts and now Portugal is lining up for a bailout too. And what’s going to stop Spain and Italy from doing the same?

Finally… how on earth is a strong Euro good for the European economy? Why defend it? Why not let it collapse to benefit European exports? Again, politics.

This is why I’m ultrabearish on the Euro and the Eurozone. Sure, the US has horrible deficits, debt loads, and politicians. But the idiocy that occurs on this side of the pond is NOTHING compared to what happens in Europe. In the US, people at least want to be a part of the US (you don’t see New Yorkers wanting out of the union because California is bankrupt).

Europe on the other hand is a bunch of countries, who don’t even speak the same languages, have a long history of wars amongst each other, and who really don’t even like each other, joined together under a single union which most European voters now don’t even want to be a part of.

After all, Greece was bailed out in May of last year. It’s since requested an extension on paying back its bailout funds… AND asked for a second bailout… in 12 months. Spain also just tried to raise 3 billion in Euros to restructure its banks and only managed to raise a little over half of this… at spreads 10 TIMES when investors demanded the last time. Italian banks have fallen 27% so far this year on debt problems… and on and on.

Indeed, the Euro is setting up for a BIG move in the near future. The currency has formed a triangle pattern. These patterns can break out either to way, but given the problems Europe faces today, it will likely be downward. And the target for this pattern is 134-136 or so. 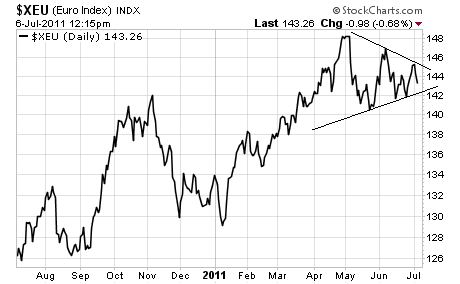 However, that move, will merely be the first of several large drops as the Euro is ultimately not going to exist in its current form within the next two years. BIG MONEY will be made by the smart investors who prepared for this in advance.

Because when the Euro collapses, it will have a MASSIVE systemic impact. The volatility will be very VERY intense. And various asset classes will implode. Indeed, we will very likely see another Crisis that makes 2008 look like a picnic. Which is why if you’re not taking steps to prepare for what’s coming now, you need to start moving.