Analysts and commentators remain hung up on whether or not the Fed will raise rates next week.

Certain Fed officials have been stating that the Fed should commence tightening. However, with China’s bubble collapsing, dragging down the Emerging Markets, there are plenty of excuses for the Fed to postpone yet again.

Ultimately, I remain convinced that whenever the Fed does hike rates, it will largely be a symbolic rate hike, say to 0.35% or 0.5%. That will be it for some time.

I say this because the Fed cannot afford raising rates anywhere near historical norms (4%). There are three reasons for this:

Regarding #1, there are over $9 trillion in borrowed US Dollars floating around the financial system invested in various assets. When you borrow in US Dollars you are effectively shorting US Dollars. So if the US Dollar strengthens, you very quickly blow up (carry trades only work when the currency you are borrowing in remains weak or stable). 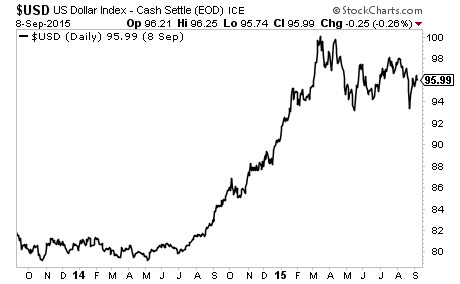 The US Dollar has rallied over 20% in the last year. It is currently consolidating. But if the Fed were to raise rates significantly, the interest rate differential between the US Dollar and other major currencies (the Yen is at zero, while the Euro is negative) would result in large amounts of capital moving out of the Yen and Euro and into the US Dollar. This would blow up that $9 trillion carry trade leading to systemic risk.

Regarding #2, bonds are the senior most collateral backstopping the derivatives markets. Over 77% of derivatives are based on interest rates. This comes to roughly $156 trillion in interest rate-based derivatives… sitting on the big banks’ balance sheets.

Suffice to say, the Fed cannot afford a spike in interest rates without imploding the big banks: the very banks it has spent trillions of Dollars propping up.

Finally, the US economy cannot handle a normalization interest rates.

This is not the usual “the Fed cannot raise rates ever” nonsense. It is more a structural argument. A sharp drop in business investment is what causes recessions. When businesses stop investing, job growth slows and the layoffs start soon after. This is how a recession begins.

With corporate profits already falling, US corporations already have less cash available to pay off the gargantuan debt loads they’ve accrued in the last six years (courtesy of the Fed keeping rates at zero). A spike in rates would only accelerate the pace at which corporations cut back on investment, as they have to spend more money on debt payments. This in turn would trigger a recession.

At the end of the day, the Fed has failed to implement any meaningful reform. The very issues that caused the 2008 Crisis (excessive debt, particularly in the opaque derivatives markets) are at even worse levels than they were in 2008.