A Crash is Coming… (Either in Oil or Stocks)

Oil may have just stopped the Bank of Japan.

The fact is that in late September 2016, the Bank of Japan embarked on a new monetary policy of targeting a yield of 0% on 10-Year Japanese Government bonds.

What this means is that the Bank of Japan will intervene in the market to maintain a 0% yield, and this involves aggressively devaluing the Yen against the $USD. You can see this in the chart below. 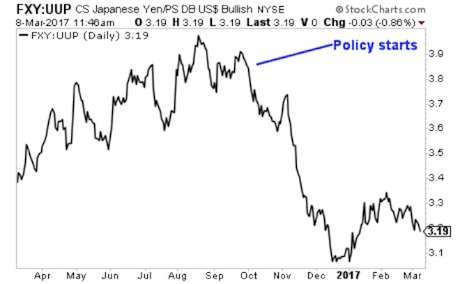 This is the famed “yen carry trade” through which devaluing the Yen boosts risk assets. The reason it works as market manipulation is that 80% of market activity is now dominated by computer trading algorithms that operate based on correlations.

As soon as the Bank of Japan began this campaign, the algorithms synched up with the Yen/ $USD pair. Since that time, the correlational buying activity between this currency pair and US stocks has been extreme.

On a weekly basis the correlation was above .75 from mid-December until late January. It has since fallen somewhat but remains above 62%.

Let me repeat this… the correlation between the weekly moves of the $USD/YEN pair and the S&P 500 was over 0.75 for more than a month. This is statistically impossible unless you are dealing with outright manipulation via compute algorithms.

However, Oil appears to have finally ended this.

When the Bank of Japan engages in rampant devaluation of the Yen against the $USD is exports deflation into the west. The last time the BoJ did this in 2014, commodities experienced their worst collapse in 40+ years. Oil was what stopped this as it plunged 75%…forcing Oil producing nations to “call the Bank of Japan.” 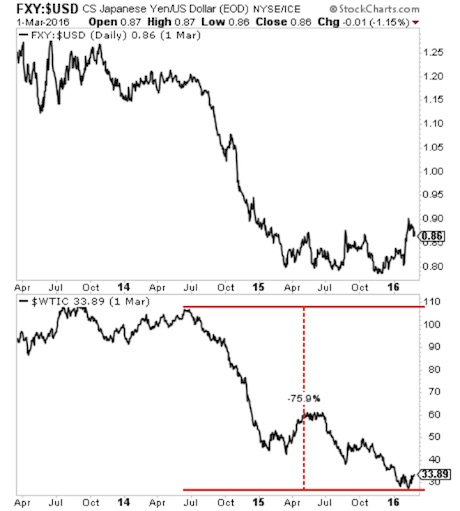 The same scheme is playing out now. Thus far Oil has been immune to the Bank of Japan’s insanity… but no longer. And if the Yen/$USD pair does not stop dropping, OIL WILL CRASH.

Currently the Yen/ $USD pair suggests Oil is going BELOW $40 per barrel. 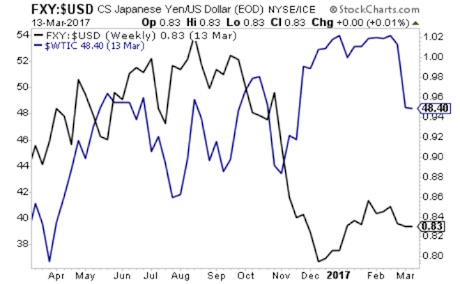 If you think last week’s carnage in Oil was bad… wait until you see what is coming. The rampers now have a choice… let stocks “go” or watch as Oil falls in HALF (the ultimate downside could be sub-30s).

Either way, a crash is coming… either in stocks or Oil.

If you’re looking for active real time “buy” and “sell” alerts to help you make money from the markets I strongly urge you to take out a 98 cent trial to my Private Wealth Advisory newsletter.

Private Wealth Advisory is a weekly investment advisory that tells investors what stocks and ETFs to buy and sell… and when to do so.

Just yesterday we closed out two more winners of 8% and 9%.

Best of all, you can explore Private Wealth Advisory  for 30 days for just $0.98.